As you may gather, it’s kind of a big deal for our property buying team to understand where the UK housing market is heading. Should you buy, sell, remortgage or hold on to your current deal? Our experts have come together and shared key market predictions and what to do in your situation whether you are a homeowner, renter, landlord or investor.

There are always a few underlying changes or events that spark a downfall and this situation is no different, there are a bunch of stories & articles on the news sites about the property market and London but which of the issues mentioned could be to blame for the current trend of lowering house prices & are these the only issues that could cause UK house prices to crash in 2019?

4 Factors that could cause UK house prices to crash Now let’s take a look at these in a little more detail.

This one may seem odd but let’s look into it a little. Right now, the Demand for homes in the UK housing market is prevalent however, the government has been falling short of building the required amount of homes for it’s residents for quite some time now. Your first thought might be that if there are less houses for sale that would mean they should cost more because there is a shortage? Yes & no. There are fewer houses being built & for sale – yes, but fewer people are able to afford them. Demand is backed up by the ability to pay and with increased inflation & declining incomes the demand will soon decrease resulting in lowered house prices.

Currently mortgages remain stable and affordable which keep prices static and does not put consumers under any added pressure when it comes to taking out a mortgage. Forecasting ahead, this would change instantly if the Bank of England decided to raise interest rates. It’s by no means on the agenda as of right now but with rising inflation they are expected to increase in the medium-long term. If the rates do increase it will lead to an increase in mortgage rates which will make it harder & more expensive for homeowners to pay off their mortgages. This in turn may cause house prices to drop further.

Consumer confidence works in a very simple way. If confidence is high people are more likely to part with their money and invest. If it’s low then the opposite will happen and people will risk less and hold onto their money.

With the above points and Brexit still not full concluded there are fewer people investing in the economy (this includes investments outside of property as well) the result will ultimately be a weaker economy.

Good old Brexit – even though the UK formally left the EU on the 31st January 2020, with the recent Coronavirus outbreak full Brexit talks have been put on hold until further notice.

You can never have an article related to Britain’s economic shortcomings without talking about Brexit and it’s still a factor because there the UK has yet to agree a post-Brexit trade deal. Before we dive in let’s refresh our memories and remember some key events that have happened since Brexit so we can understand the UK’s current position and what kind of deal could be agreed in the future.

Ever since the beginning of the recession in 2008 the property market has continually suffered and this trend looks set to continue over a decade a later, just look at the graph below to see how volatile has the UK housing market been over the last 15 years or so. 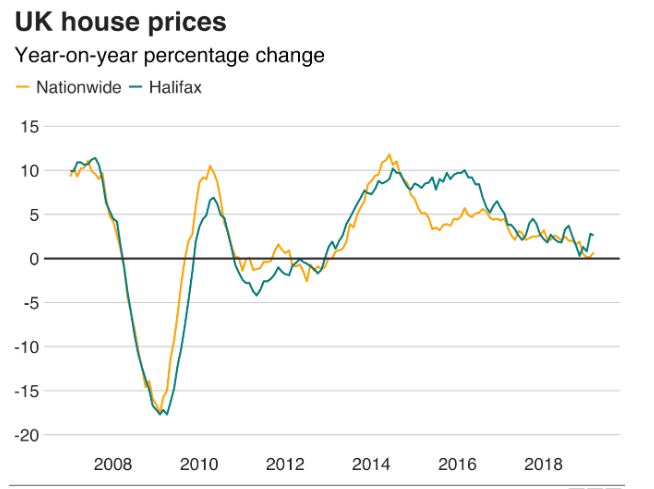 The housing market in general has been in turmoil over the last few years but things could be set to get even worse as prices may drop even further.

With so many conflicting reports on housing data out there from trusted sources – some of which totally contradict each other, it can be very hard to understand what’s going on.

This uncertainty is taking it’s toll on homeowners as many of them are struggling to make a decision on whether they should count their losses and sell up now or hold on and hope the market recovers so they can get more out of the sale of their properties.

The statistics right now show that property prices down south and in London are struggling more than those further North.

That being said, according to the Guardian and Nationwide News housing data for May there has been a 0.2% drop from the previous month.

In addition to this data, a recent survey from the same source suggests a lowering trend of house prices as ‘consumer confidence remains subdued’

In relation to the survey, Howard Archer, the chief economic adviser at EY Item Club, said:

So how is your area doing? Have house prices been affected or could it be that that prices are actually increasing where you live? Let’s find out. The image and figures above tell us a clear picture in that London and surrounding areas are struggling much more than those in the North. That being said, the north-east is not doing well in comparison to it’s counterparts.

So what’s causing property prices to drop especially down in London? Consumer confidence is one issue but it’s clear that alone won’t cause a property meltdown. The main problem is that the UK is suffering from a number of issues and everything combined may contribute to Britain’s property marketing collapsing.

The 10 Key Events in the Brexit Timeline

The big question here is could Brexit cause a house price crash? We believe it’s possible. Ever since Brexit was announced on the 23rd June 2016, the pound has weakened significantly losing 13% of it’s value against the dollar. Although there are other reasons for the pound to have lost value, it is thought that Brexit is the main culprit. The pound weakening means that budgets have been tightened and inflation has picked up but wages have remained static so less people can afford to purchase homes which has been dragging down house valuations.

Furthermore, the bank of England governor, Mark Carney has stated, the uncertainty surrounding Brexit & how well Britain will negotiate its exit and future dealings have also had a negative effect on the economy.

Additional evidence to support that Brexit does and continues to have an impact on exchange rates comes in the unlikely form of the pound jumping past 1.30 euros after the EU recently stated that they are determined to reach a Brexit deal at all costs.

This tells us that if Brexit had never happened or if a deal was reached earlier, the pound-sterling exchange rate would be more stable and possibly even higher than it is right now.

A weaker pound doesn’t help anyone, especially the property industry!

Housing market Prediction (Should you Buy, Sell or Hold?) No individual or group or news station can tell you with 100% certainty how much all of these factors will impact the property market as there is still so much uncertainty among homeowners and experts alike, having said that our team has put some action points and advice down depending on your position:

Due to current market due to uncertainties it may be wiser to hold out but if you want to buy then go for fixed mortgage products (3 to 5 years).

Look for a product that will cover you for at least a 3 year period unless your’re looking to overpay significantly in which case a flexible product might be a better option.

There have been over a dozen anti-landlord regulations passed in the last few years and things looking to get tougher, this has caused landlords to start selling up. We also recommend you speak to a tax adviser to workout if this is something for you.

With the diminishing returns in property market, alternative investments such as oversea property investment, uk small-mid size equities or even bitcoin investment might be an option.

It could be that the government reveals new plans to build more homes which will help combat the supply & demand issue, or it could be that a favorable Brexit deal was agreed overnight which may boost confidence and help stabilize the pound-sterling exchange rates. On the flipside, the Bank of England could decide to raise interest rates which would more than likely cause more friction within an already struggling housing market.

So as we close out this article, we’ll leave you with the old saying ‘Only time will tell‘ and it couldn’t be more true in this case. The economical forecast is foggy – we will undoubtedly have a much clearer picture of which direction the property industry is heading towards the end of 2019.

If you found some useful information in this article then please share it on.

What are your views on the on the UK property market and Brexit? Let us know your thoughts in the comments section below!
✕